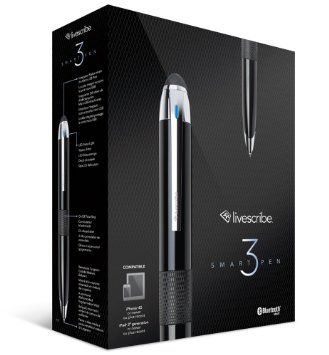 As a note taker, I found myself wondering why I even bothered. I almost never referred to my notes and, when I did, I was poring over a bunch of notebooks with a bunch of pages and rarely finding what I was looking for. So, last week, I started looking for a digital solution…

At first I thought maybe I could use a tablet. I have a (cheap) android tablet already, and I gave it a shot. No good. Writing with a stylus on glass is nothing like pen on paper.

I then turned to “digital pens”. There are a number of different approaches out there as well as a number of price points. The two primary camps are two approaches: Use a receiver attached to your notebook which tracks the pen OR Use a pen with special paper so the pen always knows where it is.

At first glance, I thought “There is no way I want to be stuck buying special paper…”. The receiver, however, would mean I would have to carry, and charge, TWO things. So I thought maybe the special paper was worth it. I decided to buy the LiveScribe 3. The internets say it is the “absolute best thing out there”. And it is. Sort of.

I have made a number of notes for this post using the livescribe 3. Some are gone. They simply never made it to the app. I have the analog backup, but, frankly, loss of data is something that is not acceptable. BOO #1.

Also, searching is kind of limited (see YAY’s and BOO’s below) so I started having to annotate stuff with unique strings so I could search and gather stuff (example: “TD:” before any To-Do item. Then I could search for that string and see them all.

Pencasts aren’t a huge deal for me, but some people love them. Basically, when I am in a meeting, I can tap an icon on the page and my phone will record audio that is in sync with my notes. Pretty cool, but a specialty feature I wish they had focused more on the app’s functionality.

The apps…. There is a link app, which handles communication, and a LiveScribe+ app which shows you notebook contents by page, a “feed” which is basically a list of entries in chronological order (oldest first? really guys?) and a pencasts page.

Exporting to Evernote is done with the standard Android “Share” menu item. Clunky at best. Also, it is difficult (3 steps) to get text to evernote. Otherwise, you end up with jpeg’s of your page (i.e. unsearchable) or a PDF (again, unsearchable unless you have Evernote Pro.

A lot of people complained about the size of the pen. I don’t see a problem. The pen, simply put, is amazing. Size, flow, etc. is perfect. I love it. But….

For the most part, the pen is as amazing as the app is poor. I almost sent the pen back because of the app but, according to the internet, this is as good as it gets….

Let’s get to my tl;dr list of good and bad:

OTHER ITEMS OF NOTE:

FEATURES I WOULD LOVE TO SEE (LiveScribe, are you reading this?)

I love this pen. Seriously, this pen is up there with High speed internet, DVR’s, surround sound and smart phones for “life changing tech”. It is incredible and awesome.

The app is simply unusable. All of the value the pen creates is shoehorned into an app that renders all that wonderful data accessible only through a keyhole that is tiny and complicated. I wasn’t thinking I would have “early adopter remorse” on a product from a company that has been putting out stuff for 10 years, but I do.

If the pen weren’t awesome, this would be on it’s way back for a refund. But since it is, I will wait for EITHER an open SDK so I can write my own note gathering app OR a renewed commitment from LiveScribe to create something that helps me capture my notes more quickly and find content more easily.

I will give the LiveScribe 3 a 4 out of 5 stars. “But you just said the app is terrible?”. Yep. That is how awesome the hardware is… It makes up for the software.

This site uses Akismet to reduce spam. Learn how your comment data is processed.